Plus it makes my heinie GLOW when I forget to remove it from my ass...before I take my clothes off to shower. Or at the dog track.

Reminds me of a story. Couple weeks ago, out in Memphis when I run into my good friend Jon Voight.

NOW. This is Jon Voight. JON VOIGHT! Big strapping cocksucker. Bigger than I remembered. Must be, I don't know, 9 feet 11 inches tall.

So I ask him AGAIN, I say Johnny, baby, you're ACTING funny. And you look so...

His response comes back to me same way left my mouth.

Now I've heard of this particular. Psychosis. UGLY thing. Once picked up a hitchhiker. Had the same thing. Copied everything I did, faces I made, things I said. Left her buried to her neck in the desert.

She was a copy-CAT. She should KNOW better by seven years old.

Well I know better. NOW. Now I know that live burial isn't the cure for this affliction. Gotta use REVERSE psychology. Reverse psychology. A term my shrink taught me. Means to choke with a bicycle chain.

Was at this point that a guard pulled me down off my friend Jon. Asked me why I'm climbing the leg of the Jefferson Memorial with a bike chain in my hand. Seems I'd confused my friend Jon with the monument to founding father Thomas Jefferson, located in Washington DC.

It explained his pale face. Why he looked so fucking big.

Further egg on my face when they EXPLAINED... the Jefferson Memorial hadn't been mocking me at all. Apparently there's an echo in the giant cocksucker's house.

Could've been what happened in the desert. Who KNOWS...

Still, you could imagine my embarrassment. Worse than the time I spent New Years EVE on the west side of Manhattan, trying to make it with the Statue of Liberty.

But even still, I must say, Voight or not, that Thomas Jefferson. Must have been an enormous cocksucker. 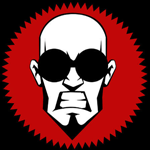